The Birmingham Metallurgical Association was the first exclusively metal based society in the UK. Iron and Steel societies, including The South Staffordshire Iron and Steel Association, predate it by several decades. In 1905 the B.Met.A was founded by two close associates. Professor Thomas Turner was the first professor of Metallurgy in Birmingham University, and Arthur Hiorns, head of metallurgy at the Birmingham Municiple Technical College. Both had studied at the Royal School of Mines in London and both were more interested in iron and steel than the other metals. Hiorns was a teacher, rather than a researcher, while Turner was a pioneer in the study of cast iron and was the first to understand how to control whether a cast iron turned out white or black. In 1908 the B.Met.A took the lead in the founding of the Institute of Metals. Its first meeting was held in Birmingham on November 11th 1908. Gerard Muntz and (the second) Henry Wiggin were appointed as Vice-Presidents and Thomas Turner and Gustav Boeddicker (chemist at Henry Wiggin and Co Ltd) were appointed to the Council.

Several of the early Journals of the Institute of Metals are available from Archive.org.

The Iron and Steel Institute was founded almost 40 years earlier and the tradition was consequently established that the Institute of Metals was concerned with non-ferrous metals. This notion became attached to the B.Met.A, which to the remote observer chimed well with the saying ‘Sheffield Steel and Birmingham Brass’. Historically there was a lot of activity involving steel in Birmingham, as is testified by the fact that one of its central streets is called ‘Steelhouse Lane’. The B.Met.A. never had any scruples about including iron and steel in its programmes. It did not, however, venture into the design of blast furnaces or other steel specific equipment, nor the details of the mineral processing of iron ore.

Turner would have recounted, at one of the meetings, his work on identifying which sources of ore resulted in graphite formation and which yielded the carbide form. It was this that led him to understand that it was silicon that caused the formation of graphite

Carbon can exist in two forms in Cast Iron. It may form a hard brittle Iron Carbide, white in appearance and commonly known as Cementite. Irons which contain a large amount of cementite present a white fracture appearance when broken and hence are known as white irons.

The addition of Silicon to the Iron was found to increase the instability of cementite and promote the formation of graphite flakes. The presence of graphite flakes results in a softer iron which is readily machinable. Such irons exhibit a grey fracture surface and are described generally as grey irons. 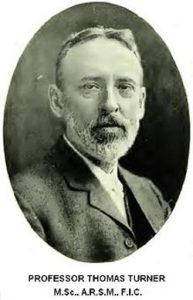 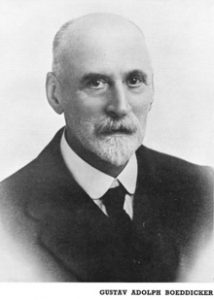 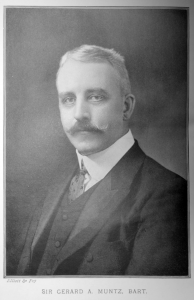 Boeddicker, Turner and Muntz were all members of the initial Council of the Institute of Metals. Muntz was chairman in the second year.

Click on any of the above pictures to see a detailed history from Graces Guide.