Arthur Horseman Hiorns ( born in Kineton- in 1847) began to give lectures in physics and chemistry at branch classes of the Birmingham & Midland Institute in 1873.
In 1875, convinced of the subjects value to Birmingham’s metal trades, he began to give lectures in Metallurgy (as a distinct subject in its own right). He developed a well received course in Theoretical Metallurgy. In doing so, he became the first designated lecturer in the subject outside of London. Unfortunately for the students, the lectures took place on Saturday Evenings!

In 1882, Hiorns travelled to London to further his metallurgical studies, whereupon, he shared lodgings with Thomas Turner who was reading for an MSc in Metallurgy. Thomas Turner later became the first Professor of Metallurgy in the University of Birmingham. He and Hiorns remained friends for the rest of their lives. On his return to Birmingham and a resumption of teaching duties, Hiorns became head of the School of Metallurgy. With the help of some donations from local industrialists, a room was furnished in the basement of the Birmingham & Midland Institute building. Being below ground, with limited ventilation, there were occasions when students had to remove themselves from the stifling and sometimes, asphyxiating, atmosphere. 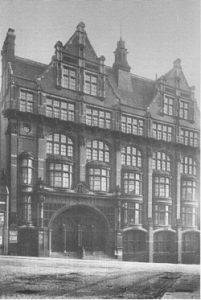